Home / News / A Few of The Most Spectacular Properties in Scotland

A Few of The Most Spectacular Properties in Scotland 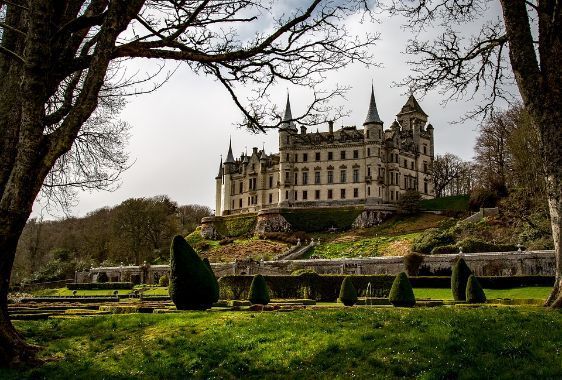 Here in Scotland, we’re proud to be named the most beautiful nation in the world and we can see why. Across the country, the natural beauty on show is astonishing, so it’s no wonder that some of the properties are just as beautiful. Here we describe some of the most spectacular homes, estates and castles across Scotland.

Situated near Wick, not too far south of John o’ Groats, sits the Noss Head Lighthouse which was completed in 1849. As part of the lighthouse complex, the keeper’s home consists of three bedrooms which are all available for guests to stay in on their holidays. Most notably, the lighthouse was the first to use diagonal panes of glass which were considered stronger. Following the construction of the lighthouse, all future lighthouses built in the area utilised the same technology.

Dating back to the early 1900s, Glenborrodale Castle is a gargantuan 16 bedroom home right in the centre of the Highlands. Set across a beautiful 133 acres, the home features stunning gardens, tons of marble and a turret to view the surrounding area. Even more impressively, the estate includes both the Isle of Risga and Eilean an Feidh so the owners can take a trip amongst uninhabited islands.

The tall spires, turrets and beautiful gardens of Dunrobin Castle make it seem like a castle taken straight from a Disney film. The castle has been inhabited since the 1300s, making it one of the oldest inhabited properties across the UK and it’s the family seat of the Earl of Sutherland. Astonishingly, the castle has 189 rooms!

If You’re Looking For an Estate Agent or Solicitor You Can Trust in Scotland, Look No Further Than McDougall McQueen

Here at McDougall McQueen, we pride ourselves on our ability to help the residents of Scotland in the areas of property sales, family law, wills and executries and commercial law. If you’re looking for assistance or advice in any of these areas, look no further than McDougall McQueen.

To find out more, contact us today. You can find us at one of our two offices in Edinburgh or in Dalkeith, Penicuik, East Lothian or Gorebridge. Alternatively, call us on 0131 228 1926 for Edinburgh, 0131 240 3818 for Midlothian or email us at info@mcdougallmcqueen.co.uk.